I am sure that every future app owner wonders, "Which programming language should I use for my application?". The topic is extensive because there are a lot of technologies available on the market right now. Unfortunately, picking the wrong technology brings some business risks, such as difficulties with finding developers, feature barriers, quality difficulties, or (the most costly) necessity to rewrite the app. I am aware that technology price is decisive in many cases, but paying attention only to costs can be destructive. Technology should empower your business. I encourage you to get familiar with the possibilities before you decide which code to use. Let's take a closer look at one of the most popular technologies recently - Golang also known as Go.

Golang was released in 2009 and created at Google by Rob Pike, Robert Griesemer, and Ken Thompson. Google engineers are known as the creators of powerful and user-friendly products. Their code is precisely like this. The goal of Golang is to improve developers' and designers' working environment.

Why is Golang so popular?

Of course, we cannot ignore the fact that Go was created by people from a very influenced company - Google, that has been trendsetting for years. It does not change the truth that Golang is an efficient language that has become very popular among developers in recent years. It is easy to learn language for people familiar with coding, and it has a friendly ecosystem. The creators designed it to be

and understand. That's why Golang gathered quite a big community.

Let's take a look at some facts:

The business willingly chooses Golang. Great companies decide to use Go because it is a perfect code for big, complex projects. It's easy to find proper technology for a small, simple IT project. The challenge appears when it comes to building a demanding and complicated application. In that case, language needs to allow for flexible changes and constant

"Go gave us huge flexibility, single language for all usecases and for all of them it working very very well. We got about 30% more performance on our Backend and API services."

Why use Golang? 6 benefits of using Go in your business application

The technology chosen for the project should meet the business goals and allow for future improvement or modification. It's not an easy decision, especially for non-technical project owners. That's why I encourage you to consult with a

that will advise a stable and suitable programming language for your app idea.

There are many programming languages available right now on the IT market. As you can see from the paragraph above, top enterprise companies willingly pick Go for their complex projects. They are using Go for both mobile and web applications. Why is it worth to pay attention to the Golang code?

Thanks to the concurrency model and small syntax, Golang is faster than other languages like Java or Python. We can also say that it is also simpler. Developers don't have to go through a terrifying amount of code lines, and that is a huge timesaver. Go makes the programmers' work much easier and more efficient also because it has many necessary tools available. The high speed of performance has a positive impact on app implementation and optimization of client's costs.

Golang is one of the most flexible programming languages. It is especially important when it comes to future app improvement. We can use Go to build cloud services (like Dropbox), media & streaming platforms (like, for example, YouTube), news outlets (like BBC), on-demand services (like Uber). As you can see, the spectrum of use of this programming language is really wide. Using Go is a good choice when you start with

and plan to extend your app.

In Go, like in any strongly typed language, the type system allows the compiler to help catch entire classes of bugs. Thanks to that, fixing the bugs is more friendly for developers. The philosophy of Go and its creators says that there should be very few solutions to one problem. This approach distinguishes Go from other programming languages. Furthermore, Golang has a code analysis tool called Golint that helps understand the written code and maintain the standard in code writing. Quick error fixing during the development process has a very positive impact on app maintenance, safety, and reliability.

Golang is a relatively new programming language. When its creators started work on it, they were aware that the app market is dynamic. We can say that Go was designed for the Internet and its requirements. The standard library allows creating sophisticated web services. The binary file in Go can be even 10 times smaller than in Java, thanks to that loading time is much quicker. Users with older devices shouldn't have any problems with applications written in Go.

05 The popularity & number of Go developers is growing

No doubt, programming in Golang gained interest among developers. The market requires specialists in this domain. Employment website Indeed.com shows over 2k open job positions related to Golang. Furthermore, Go is recognized as a rather simple programming language. Programmers experienced with C++ learn it easily. The next important factor is that Go is a statically typed and compiled language, so coders can easily detect any problems at the early step of work. Basically, it is a friendly programming language for developers.

06 Go is supported by Google

As I mention in the first paragraphs of this article, Go has wide support from Google and its engineers. The situation is pretty similar to

. Influential, huge companies create trends that are hard to ignore. Everything seems to indicate that we don't have to worry about the future of Golang. It comes out of giant Google so that the organization will ensure constant financing and updates. It's important because no one wants to develop an app in a language that suddenly ceases to develop.

How to develop a business application?

is a complex process. You can do it in-house by hiring developers and building a team or decide to trust in

and find a proper partner with experience. In the second case, you can pick a

. The main advantage of choosing a software company is that you have access to complete know-how, and a team of people works on your app success. This is how we develop web applications:

When it comes to building a business application, it is crucial to choose the partner that already has experience in developing business products like,

. It is also worth researching what technology partners use.

Next, it is important to start with a goal. "What is the goal of your application?" That is the first question our specialist asks potential clients. When the aim is defined, we build the whole strategy around it.

To deliver high-quality apps, at Railwaymen, we are open to organizing

that aim to understand the product and everyone's perspective. During the Workshops, we outline the next steps of app development and choose the appropriate programming language that will face the app needs.

Should you use Go? This compiled language gives a lot of business advantages. In my opinion, the possibility of extending the app features is the most important. It seems that Go language will thrive in the coming years, and that is a great plus.

Go is a rather new programming language, but it already gained popularity among programmers and top world's companies. The fact that it was created in 2009 makes it suited to the needs of the Internet, modern users and devices. Golang is updated twice a year, and compared to other programming languages, we can say that it is often. Every modification brings new, exciting features. Dynamic development encourages creating apps using it. If you are looking for advanced, powerful technology, you should consider Golang.

In this article, I described the advantages of Go, but I want you to remember that every programming language should be selected for each project individually, after consulting with specialists. Don't rely on buzz or low technology prices, be open to suggestions, and check whether it is possible to use Go in your project.

Starting app development for business requires some key steps. Choosing the right programming language is important, but even more crucial is to find talented developers. You see, even the best technology in the wrong hands can fail. So make sure that you know well your development team before signing the contract.

In case you need the coders, here you can download the presentation that shows our experience, portfolio and skills: 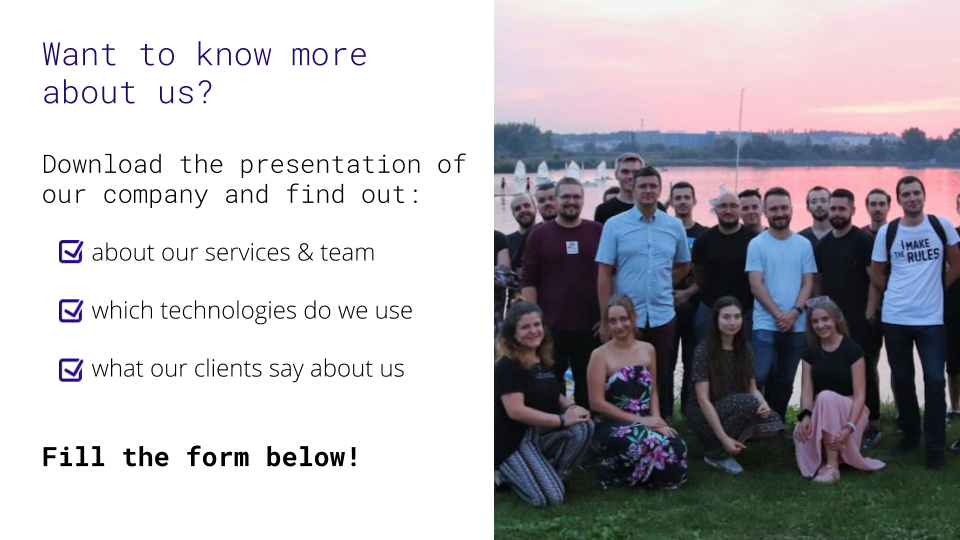 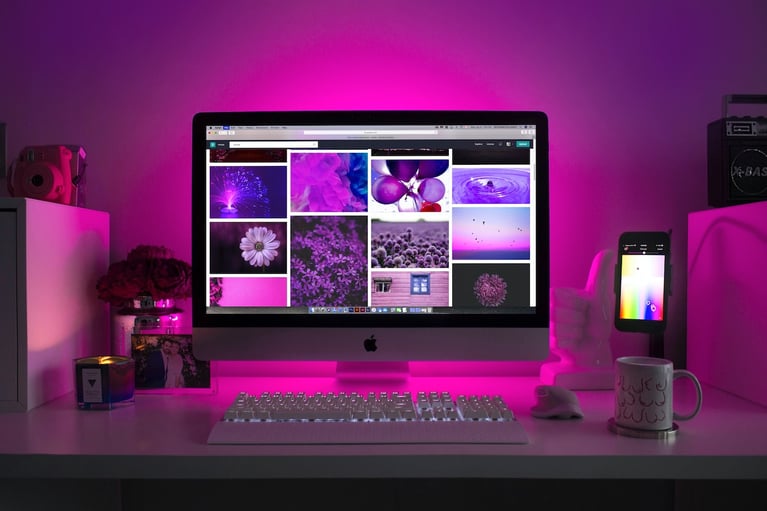 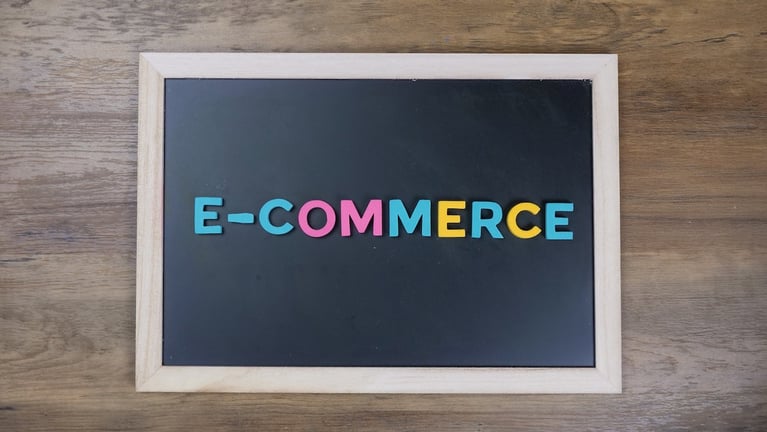 Why is Custom App Development Cost so High in 2021?